I’m on the late train but over the last couple weeks there’s been another round of soul-searching among conservative political strategists.   All this “soul-searching” is getting exhausting.  Republicans should just give it up.  Finding the soul of the GOP is like finding your missing other sock behind the laundry machine.  It’s just not there so you might as well stop looking.

It seems as though House Republicans have mostly decided to either completely sink immigration reform or gut it beyond all recognition (if they don’t like the incredibly compromised Senate bill, there’s pretty much nothing left to give).  I think they’re being assholes, but if I was them I would probably do it too– in the long run, the truth is they’re screwed either way.

Why drop their initial interest in making a deal?  They never wanted to do it in the first place.  It seemed like a political necessity after Obama won over 70% of both the Latino and Asian vote in November.

But all of a sudden, they have a justification to go with their hearts.  Recently conservative pundits have jumped on this guy named Sean Trende who came up with an idea called the “Missing White Voter” theory.  Basically it goes like this:  The real reason Republicans lost in 2012 is that a whole bunch of poor rural white people were like “Obama is a Muslim socialist but Romney is a Wall Street elitist.  Fuck it, I’m not gonna vote.”

The solution being put forward is for the Republican Party to adopt “libertarian populism”, whatever the fuck that means– basically my understanding is it’s the same exact policies as Mitt Romney’s Wall Street elitism– cut taxes and government programs, deregulate businesses, but you call them “populism” because you talk about them in a folksy way while wearing a cowboy hat.

The major implication here is that congressional Republicans should NOT support citizenship for millions of undocumented immigrants, because they probably won’t gain much support among Latinos anyway and they’ll further alienate the white people they really need to motivate to vote.

This is the sound of Marco Rubio being discarded.

I think the Missing White Voter Theory is pretty weak.  Other analysts say the numbers don’t add up and the GOP can’t win in the long run solely by making more gains among white voters.  But Republicans don’t like it because it’s smart, Republicans like it because it tells them what they want to hear.  It’s like a new fad diet where you can eat whatever you want and still lose weight.  They get to make no fundamental changes or tough choices and still win because if the GOP goes even farther right wing, white people will be stoked about voting again, right?

Where I disagree with the conservative pundits is that they think they can still survive with another strategy.  The demographic demise of the GOP (as we know it) will happen whether immigration reform passes or not.  The main growth in Latino voters is coming from American-born kids growing up, not from people becoming citizens.  Most young people who grew up poor and brown in America wouldn’t vote for the Republican Party no matter how much “rebranding” they try to do.  And the usual conservative ploy of trying to wedge communities of color away from white liberals using social issues like gay marriage and abortion is especially doomed to fail among young Latinos.

The fundamental problem of the Republican Party is something that can’t be rebranded or restrategized.  The Republican Party made the wrong bet, right around the late 1960’s.  They doubled down on bigotry and intolerance and it really worked for a while.  But sometimes when you gamble, you lose, and there’s no take-backs.

Sorry guys.  The moral arc of the universe is long, but it bends toward justice.

So I leave you with this image I found on the internet of Thomas Jefferson singing “Apologize”: 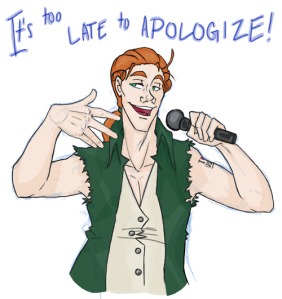