Let me start off by saying that elections get way more emphasis than they should, and that most of the real work of social change happens in the aftermath, pressuring elected officials to do the right thing.

But that being said, elections really do matter, and this one was truly beautiful.

To me this election confirmed my belief that we are at the beginning of a movement time, one of those eras when waves of progress seem to come all at once.  You’re looking at me like I’m crazy.  But it’s a lot more messy and uncertain when you’re experiencing it live than when we look back in the history books.  Here’s my case for why I think progressives are going to win huge victories in the coming years.

But here’s my 7 Reasons Why Last Night Was The Best Night Ever:

1.  Barack Obama is our president and we never have to hear about Mitt Romney again.  In terms of policy change, I’m not that excited about this– honestly the next four years will look like the last two years– Republican Congress, total gridlock, not much getting done.   Basically they just gave a black man the worst job in the world for another four years.

What was significant about the presidential race was that in the age of Citizens United, Wall St. wasn’t able to buy this election.  Finance normally hedges their bets by giving to both parties or the expected winner.  But after the major financial reforms enacted by the Obama administration, they went all in for Romney.  And lost.  When was the last time Wall St. lost anything except your money?  Now I hope Obama has the cojones to give them some ice cold retribution.  I’m also happy that in the darkest hour of the campaign, right after the first debate, I still called the election for Obama.  Saying I told you so is the best.

2.  The youth vote made an even larger impact than in 2008.  I was so sick of all the bullshit narratives about apathetic young people who came out in 2008 for a fluke because they were brainwashed by Obama and won’t vote anymore because now they’re stupid and lazy blah blah blah. Oh what’s that?  Young people made up 19% of the vote in 2012, EVEN MORE than in 2008?  SUCK. ON. THAT. SHIT. 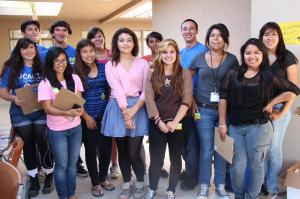 3.  California passed Prop 30 and defeated Prop 32.  This is near and dear to my heart because it’s what I’ve been working on this election.  I think the incredible thing about Prop 30 is it’s a turning point.  Since Prop 13 passed in the “tax revolt” of the late 70’s, California has been on the path of endless budget cuts to education.  Yesterday we turned this around– the voters chose to invest in our youth and our future.  In concrete terms, this resulted in a tuition freeze at the UC’s this year instead of a 20% fee hike.  And Prop 32, which may have actually been more important than 30 for big picture strategic reasons, went down too.  This all despite millions of dollars spent against us by billionaires and Super PACs who are now being investigated for money laundering.  I worked with dozens of high school and community college students who spent countless hours volunteering to get out the vote because they knew their future depended on it.  I’m so proud of them.

4.  In California, Democrats will likely win 2/3rds supermajorities in both the State Assembly and State Senate.  Some close races have ballots left to be counted, but newspapers are already calling it.  This is a big fucking deal.  Much of California’s budget craziness is due to the fact that you need a 2/3rds vote to raise taxes, or until recently, to approve the budget at all.  The California Republican Party has become increasingly isolated and radical, viewing any compromise as a sign of weakness, making it nearly impossible to get the couple of extra votes needed to pass no-brainer bills like the Middle Class Scholarship Act.  The bill would have closed a corporate tax loophole that benefits out-of-state corporations and used the money to slash college tuition by 60% for most students in California but failed this year.  But this also opens up huge new opportunities.  Some of these Dems are pretty conservative, and will be reluctant to vote for more revenue.  But with a Democratic supermajority and some good organizing, you could potentially get single payer health care in California, or universal preschool, or dramatically reduce college tuition.  As I said, big fucking deal.

5.  The next Congress will have more women than any Congress in American history.  Women candidates broke records in both the House and the Senate.  One of these women, Tammy Baldwin, is the first openly-gay Senator ever.

6.  Marriage equality made major strides.  Maine and Maryland voted to legalize gay marriage, and Washington looks like it’s on its way.  The tide is moving, it’s only a matter of time.

7.  We can all stop talking about Bronco Bamma and Mitt Romney!

Also, bonus points.  For my Ventura Couny folks, we were in one of the closest congressional races in the entire country, and the Democrat, Julia Brownley squeaked out a victory over Tony Strickland, a politician I personally can’t stand.  And Measure S in Berkeley, which would have criminalized the homeless for sitting on the sidewalks, was defeated.