The media’s been blathering on, with a nauseating amount of corny sports/war metaphors, about how Romney dominated Wednesday’s debate against President Obama.   I agree that Romney did better.  And it did move the polls a bit.

But I will still literally bet anyone cash money right here right now that Obama’s going to win.

Why?  Check out the graph on the right. 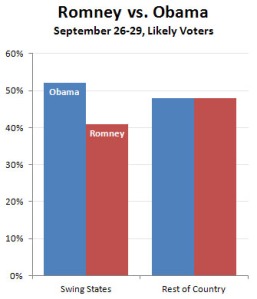 What’s going on in this picture?  Obama and Romney were essentially tied in non-swing states, but Obama leads by an average of 11 points in the states that will actually decide the election.

That’s because swing states are where the real campaigning happens.  If you live in California like me, you might forget what a presidential campaign actually looks like.  Obama and Romney volunteers don’t knock on your door or call you at night, their fliers don’t come in your mailbox, and their ads rarely show up on your TV.   But in places like Ohio, every four years this shit called a campaign goes down on your block.

Here’s what that graph on the right means: Obama’s campaign team is just plain smarter and harder than Romney’s.  It doesn’t show up in most of the country.  But in the swing states, it’s very obvious that the Obama team is killin it.

Which is why Nate Silver, whose statistical model is probably the best in the game right now, calculates Romney hasn’t had more than a 1-in-3 chance of winning since late August.  He puts Obama at a 78.4% chance of winning right now, which is down a bit since the debate.  But it’s not nearly enough to really turn things around for Romney.

That’s because debates just don’t matter that much.  Most debate viewers are people who follow politics and have already made up their minds.  Think about all the swing voters you know.  How many of them actually watched the debate?

What does sway voters, in the crucial swing states, is a passionate 20-something-year-old volunteer knocking on their door on a Wednesday night after dinner, and maybe fumbling the script they’re supposed to read a little bit and fidgeting with their clipboard, but ultimately getting some main points across and more importantly making a personal connection.

That’s where the Obama team is kicking the ass of the Romney team right now.  And that’s why Obama is going to win.

The point I’m ultimately getting at here is I think most political journalists should be shipped off to some forsaken island and forced all day to watch two ants race across the barren rocks for moldy leftovers and report about it to each other.

But it’s not just my personal beef.  This article from the NY Times sums up perfectly how political reporters just can’t keep up with how modern campaigns work:

Journalists tend to mistake the part of the campaign that is exposed to their view — the candidate’s travel and speeches, television ads, public pronouncements of spokesmen and surrogates — for the entirety of the enterprise. They treat elections almost exclusively as an epic strategic battle to win hearts and minds whose primary tools are image-making and storytelling.

But particularly in a polarized race like this one, where fewer than one-tenth of voters are moving between candidates, the most advanced thinking inside a campaign is just as likely to focus on fine-tuning statistical models to refine vote counts and improve techniques for efficiently identifying and mobilizing existing supporters.

The bumbling incompetence of political reporters doesn’t just misinform the public.  It implies that most of the work done by campaigns doesn’t matter.  Which is funny because if they didn’t, candidates would just make speeches all day instead of spending so much money hiring field organizers all over the country.

So I just want to counter the bullshit by telling all the 22-year-olds with clipboards out there that you’re winning this thing, even if Barack Obama is a shitty debater.   The proof is in the numbers.